A2. Animations in PowerPoint

At the heart of PowerPoint’s phenomenal ability for making eye-popping social media video is Animations.

As Microsoft puts it here –

Well, according to Microsoft, too much of animation can be distracting … and take the focus away from what the speaker is saying.

While that surely is true for presentations, the irony is, when the users read the refrain above they stop using animation … even in video.

And that – shall we say – is like missing a goldmine!

The truth is, you can create magic with PowerPoint animations for making social media video. And so, go ahead, explore using both Animation and Transition to make your videos.

Remember, you can combine 2 or more different animations at the same time for the same object in PowerPoint.

Do this cleverly, and in no time you can create eye-popping social media video using PowerPoint animation.

Check out Microsoft’s instructions on creating animations in PowerPoint.

PowerPoint offers 4 different types of animations. They are:

If you wish to check this out, select an object on a slide. Then click Animations on top menubar, and proceed to click on the dropdown arrow.

You’ll see the following on your screen. 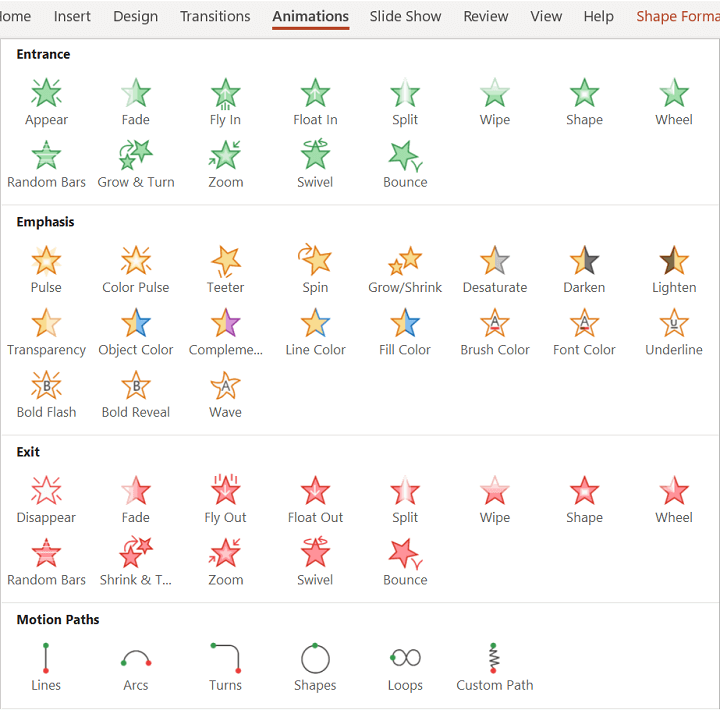 Each of the 4 animations further has lots of variations. For example, Entrance has 80 different variations, no less.

If you think that’s all there is to PowerPoint animations … well … WAIT!

Many animations have what PowerPoint calls Effect Options.

With Effect Options, a particular animation can have something called Enhancements … like animating texts by setting delay between texts or letters.

The sequence of 4 animations in the above GIF is as under:

As you can see, all the 4 animations are of different types.

Note another point in the above GIF animation.

In the 3rd animation, when the word ONE moves up, there is some lag between the 3 letters. This is done by using Enhancement with 10% delay between letters.

By now, you should be convinced that PowerPoint allows you to do almost endless types of animations.

And that – you’ll pleasantly discover – IS the real power of PowerPoint.

To explore the above animation, download for free the PowerPoint template here.

This website uses cookies to improve your experience while you navigate through the website. Out of these, the cookies that are categorized as necessary are stored on your browser as they are essential for the working of basic functionalities of the website. We also use third-party cookies that help us analyze and understand how you use this website. These cookies will be stored in your browser only with your consent. You also have the option to opt-out of these cookies. But opting out of some of these cookies may affect your browsing experience.
Necessary Always Enabled
Necessary cookies are absolutely essential for the website to function properly. This category only includes cookies that ensures basic functionalities and security features of the website. These cookies do not store any personal information.
Non-necessary
Any cookies that may not be particularly necessary for the website to function and is used specifically to collect user personal data via analytics, ads, other embedded contents are termed as non-necessary cookies. It is mandatory to procure user consent prior to running these cookies on your website.
SAVE & ACCEPT
Loading Comments...