A5. Producing video and/or GIF

With the release of PowerPoint 2013 version on 29 January 2013, it became possible to produce video in MP4 format in addition to Microsoft’s proprietary WMV (Windows Media Video) output.

The same version also saw the default slide-aspect-ratio changing to 16:9 from the erstwhile 4:3.

These 2 changes saw PowerPoint’s acceptance as a video maker, and not only for creating presentations.

In the present release, it’s also easier than before to produce animated GIFs.

In the present release of PowerPoint, you can produce GIFs in 4 different sizes (see the screenshot below): 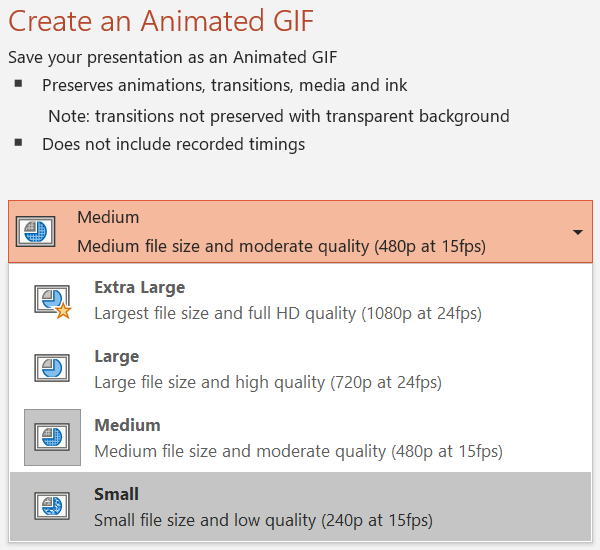 Similar to GIF, you can produce MP4 videos in 4 qualities & commensurate file sizes (see screenshot below): 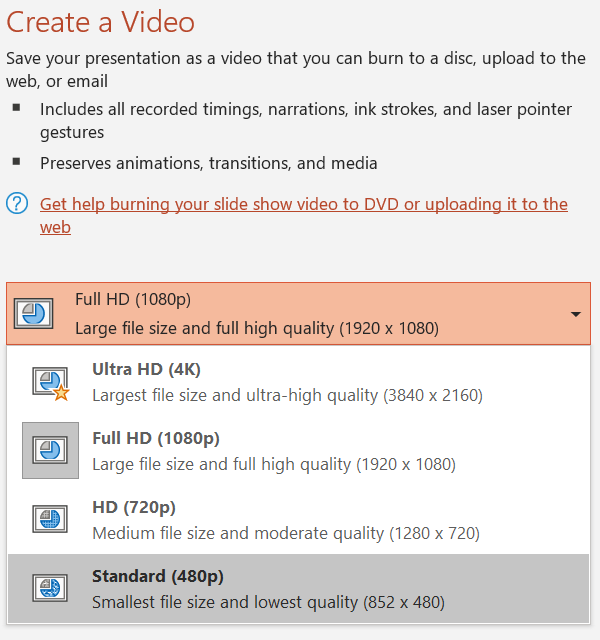 The quality of your video or GIF output will depend on permissible file-size limits of social media platforms and also on what your requirements are.

Making GIFs with PowerPoint is not difficult. Here are 2 examples of that.

The first GIF is the result of some Entrance and Emphasis animations done in just one slide … while the 2nd GIF is a collection of 3 static images on 3 slides set apart by 1 second each, with no animation and no transition.

Check out the 2 GIFs by downloading the PowerPoint template for free.

This website uses cookies to improve your experience while you navigate through the website. Out of these, the cookies that are categorized as necessary are stored on your browser as they are essential for the working of basic functionalities of the website. We also use third-party cookies that help us analyze and understand how you use this website. These cookies will be stored in your browser only with your consent. You also have the option to opt-out of these cookies. But opting out of some of these cookies may affect your browsing experience.
Necessary Always Enabled
Necessary cookies are absolutely essential for the website to function properly. This category only includes cookies that ensures basic functionalities and security features of the website. These cookies do not store any personal information.
Non-necessary
Any cookies that may not be particularly necessary for the website to function and is used specifically to collect user personal data via analytics, ads, other embedded contents are termed as non-necessary cookies. It is mandatory to procure user consent prior to running these cookies on your website.
SAVE & ACCEPT
Loading Comments...